I’m not a huge fan of marshmallows but we often have a ton left over after the summer- I don’t want to deny my children the kind of camping trips I had as a child so we roast a few and then aren’t sure what to do with the rest of them.  Of course there is hot chocolate but again I don’t like to over do it, thus marshmallow towers.  It turns out the girls have done this at school too and so were pretty excited to show me their techniques. 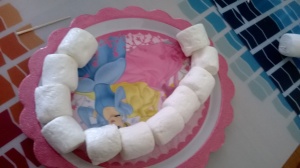 Give each person a plate/tray, a pile of marshmallows, some water and toothpicks.    The marshmallows can be connected with the toothpicks or by wetting them and sticking them together. (watch out for sneaky eaters though, my youngest downed a bunch and ended up with a tummy ache later that night)

My youngest immediately went to work creating a row of marshmallows attached with toothpicks which she then manipulated into different shapes and letters.  My eldest started with a tall tower held with toothpicks and then realized it had no stability so she had to start again.  I worked alongside them and attempted an igloo and inuksuk, as my daughter watched me she too began a similar design testing out where the best spots were to put the next marshmallows and working till completion.  The structures ended up being pretty solid, those that used the water method were pretty stuck together.

It turned out to be a very fun and educational activity, plus a great way to use up unwanted marshmallows and spend some quality time together.  Happy building!